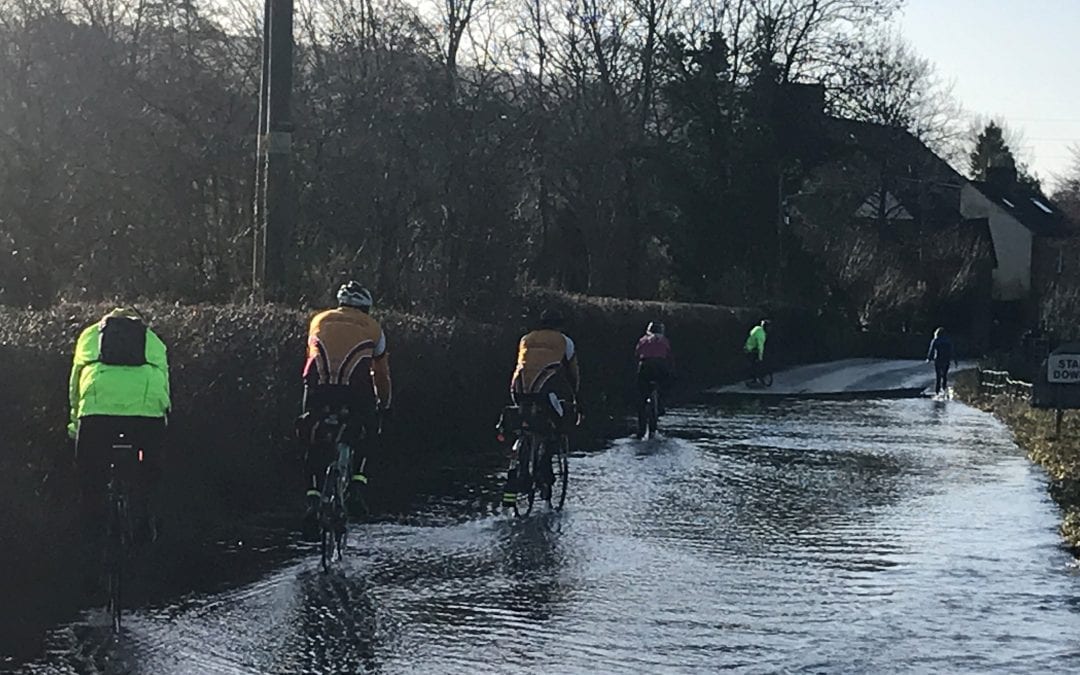 Six set off up Painswick Road to Upton via a little ‘off road’ section – dry. The climb of Nut Hill was strewn with debris – as expected. A delightful ascent to the Cranham turning provided splendid views to the north, with the City and the Malverns in sunshine. At the junction John W succeeded in a mechanical – just a rear deflation, not too bad! All was sorted whilst we admired the (very) early snowdrops. An indication of snow to come soon?

We took the opportunity of an easy road, Sanitorium, to look after our President, seeing as he was on fixed gear. A fast section soon had us in Stroud via Slad and the valley: plenty of water around. Colin insisted we used side roads to Cains Cross – a good shout as there was much traffic on the Ebley road. The reason soon became clear: the bypass was unpassable – one fool had tried and failed as we say the vehicle being removed from the flood. Undeterred, the President showed us the way through – but was obliged to return as we all declined the offer of wet feet.

Back to the main road and over to the Stanleys – crossing the Frome before Stanley Downton proved a challenge but if you kept to the left side it was marginal. Just. All six did ford this long section with success – wet feet but no full immersion! Onwards to Frocester, Eastington and Whitminster, then down to Saul for refreshments at the Stables.

Fair to say, the lanes home were largely OK, just a bit of ponding at one point. It was good to see the giraffes at Longney – for some, their first sighting!

The B ride led by the Vice Captain reported that the ground was already saturated before the arrival of Storm Bella last night, which added more water and tree debris to the roads. However, the sky was blue, and the winds had eased, which made for a great morning out on the bike.

Fallen trees and very large puddles were encountered on the lane through Haresfield, and eventually, we were turned back by a deep flood at Stanley Downton (unlike the Captain’s group!). However, diverting via Eastington led us to Coaley, Uley, Stinchcombe and down to our advertised stop at Berkeley.

The cold conditions, and particularly cold and wet feet, vindicated the decision not to stop, so we headed on to Slimbridge. Longston Lane proved a poor decision, but set us up for a speed run on the A38 to Saul. More flooded lanes took us back to the Pilot and home.