See below for useful contacts and web sites for more details / information on various topics. One link you might want to store among your favourites is our Facebook page www.facebook.com/gloscitycc/

Our right to be on the road

The graph below shows the numbers of cyclists injured on the roads of Gloucestershire. 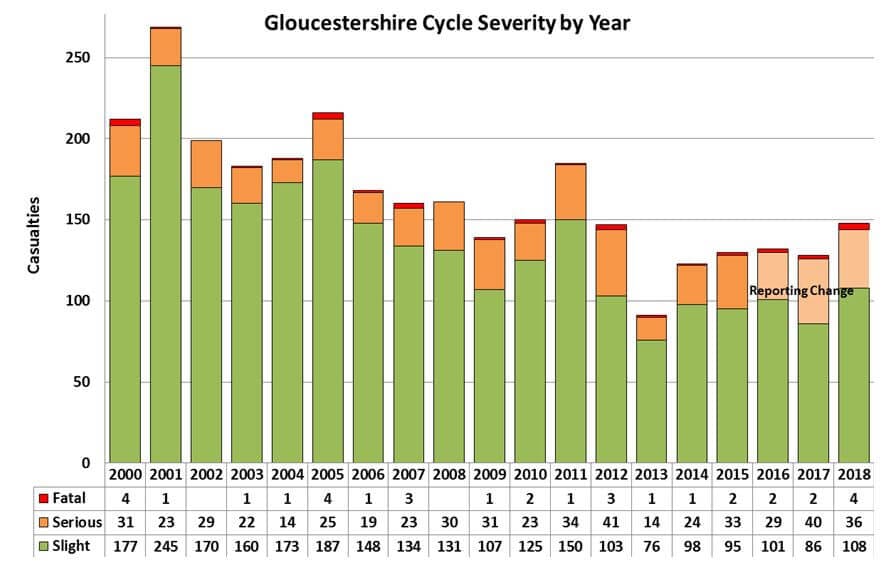 In Case of Emergency tags

How best to call the Emergency services

How best to report your location, using the what3words app

A site to report collisions and near-misses

Some advice on keeping your bones strong

The Definitive Guide to Safer Cycling

A Practical Guide to Road Safety

How close to the kerb should you ride?

Trid and tested routes to the Club’s favourite pubs and cafes can be found under the Club Rides tab on our web page. The table contains routes as links to RideWithGPS. Many of the cafe locations are linked to a map in the grid reference column.

Some tips from Cycling UK on riding in Gloucestershire and Bristol

A crowd sourced free map with marked cycle paths Open Street Maps and here’s one way to download it to your Garmin Edge GPS unit. There’s apparently another way at https://extract.bbbike.org/

A guide to various GPS devices

A range of local cycle maps is available from ThinkTravel here

Although helmets are, and can only be, designed to withstand minor knocks and falls, not serious traffic collisions the Club’s position is that their wearing is strongly recommended, especially when groups are riding close and fast, such as in the chain gang, or when off road. However, it remains a personal decision. To help you make that decision here are some facts relating to helmet wear:

An excellent source of further information is at helmets.org

A register for your valuables, accessed by police to find the owners of stolen goods Immobilise

A register for your bike, accessed by police to find the owners of stolen bikes Bikereg

Provider of “get you home” insurance for cyclists” Lexham Insurance

How to ride in a group https://www.britishcycling.org.uk/knowledge/skills/sportives-ridesmart/article/izn20151117-Sportives–Ridesmart–Related-How-to-ride-in-a-group—Ridesmart-0

How to Time trial http://www.theraceoftruth.org.uk/

A reliable, if quirky, guide to a huge range of mechanical maintenance issues on cycles  Sheldon Brown

How to use a CO2 cartridge to inflate tyres

General (and in some areas very specific) maintenance advice