The Open 25 was closed so we went to Newent 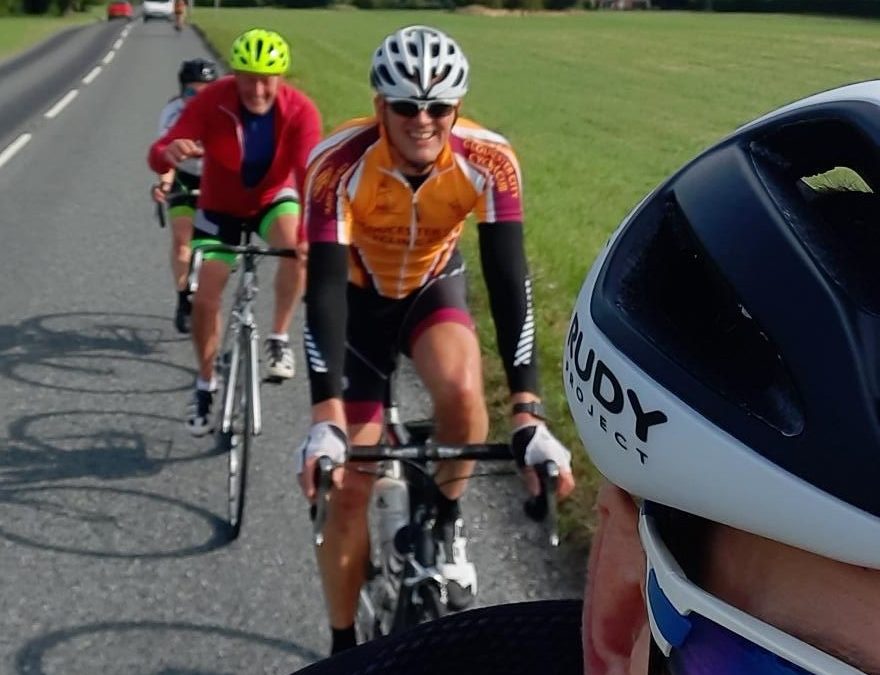 Today being the day of the Club’s Autumn open time trial we would normally have enjoyed coffee and cake at the event HQ, rubbing shoulders with the combatants and applauding the winners, but because the event was held under “no touching” rules these were not on offer. In fact, the racers were having to prepare in the car park, all warm-up turbo trainers being in the outside areas, to comply with the HQ Covid regulations. For the same reason, but there were no pushers off to see them on their way.

Still, with numbers reduced by the competing attractions of racing and assisting, two groups of Club riders left the Square for Newent. The A ride made great progress and arrived far too early, so after a brief consultation they set off on an additional loop to work up an appetite. To Jon’s delight, the fallen tree that had been on Coldharbour Lane last time he rode it had been removed, but this was not a great surprise as it turned out that he had last ridden it two years before! Whatever the road surface was like then, it cannot have been as bad as it was today and the riders felt lucky to have escaped the curse of scoring in the Bruce’s Bonus competition.

Enjoying coffee and cake, or in some cases bacon butties, they were joined by the President on his fixie, fresh from marshaling the Ledbury turn. With a mixture of horror and envy they watched him bring his bike all the way through to the outdoor eating area, their bikes all being parked and locked outside and out of sight. When the B riders arrived after their longer, and probably faster, outing, they too brought their bikes through and yet, despite oversight by all, still elected to lock them.

Departure was somewhat delayed by untangling of the bikes and locks, and for one rider to make a precautionary application of his pump, but all were soon away for a tail wind assisted return via Upleadon and Hartpury, passing the now deserted event HQ along the way,