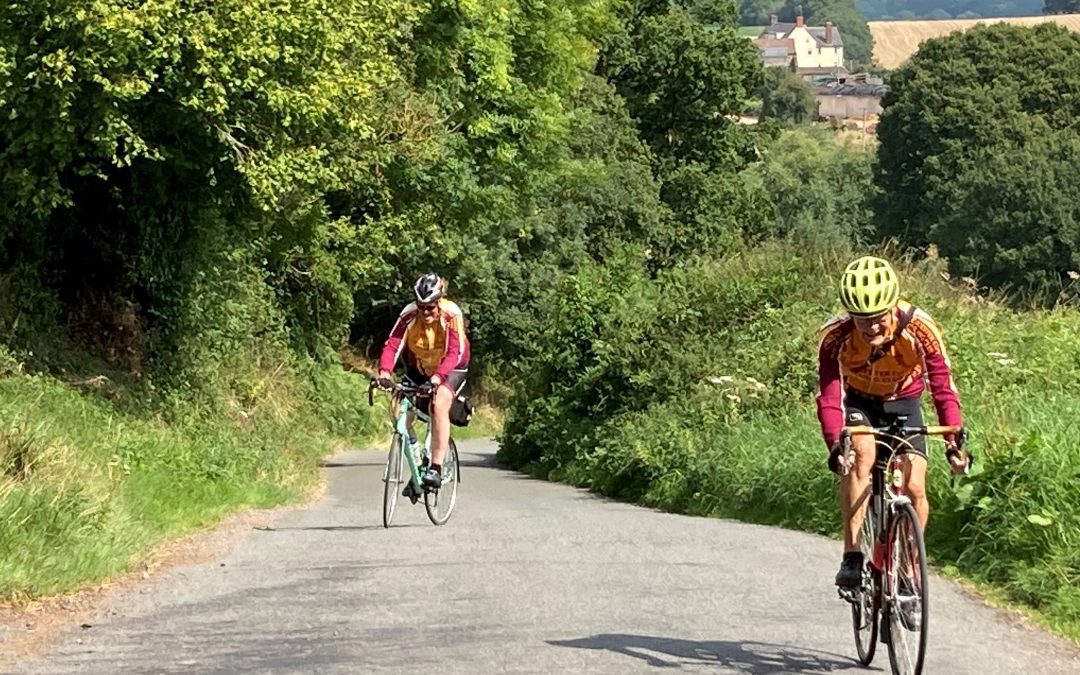 A large B ride left King’s Square, which was split into two groups on the A48 to ease traffic flow. The Route took them south west through Minsterworth, an unexpected direction considering the destination was to the North, but gave an opportunity to ride through the ever attractive Flaxley valley, passing the gathering congreagation for the church of St. Mary the Virgin on the way to the height of Dene Magna. A poor surface descending to Aston Crews managed to shake something loose from one rider’s bike (and loosen the teeth of several others), but soon the riders were on the Linton Ridge, first introduced to the Vice Captain by the legendary John Barnes whose famous advice on hill climbing was to let the bike do the work. Fat chance today! Sunshine and fine views on both sides took them to the aptly signposted “Hill Top”, and into Upton Bishop.

Perrystone Hill provided a way of avoiding (part of) the climb from the cider mill to gain the Marcle Hill ridge which revealed more fine views towards the Malverns. A rather steep pitch after Woolhope Cockshoot would have had the riders calling the leader all sorts of names, except that they had no breath to utter their curses. All was forgotten on the long descent to excellent coffee and cake at The Nest in Trumpet.

On the return, with each pedal stroke the territory became more familiar, as Brooms Green and Ketford took the first group to Upleadon. There, the starter must have fired the gun, as it was an all out Team Time Trial over the Haw Bridge to Wainlode’s Hill and home. Ketford was avoided by the second group, who had seen enough of 20% grades at the aforementioned Woolhope Cockshoot, and whose leader chose the “Dymock mountains” route through Newent and Highleadon instead. Even they managed to log 1,100 metres of climbing for the morning’s ride. What fun, and all good preparation for next weekend’s Tour.

The A ride took a sensible if convoluted route to Ledbury and Coffee #1, being the only operational coffee shop in town on a Sunday. A standard start had nine riders set off to Maisemore and Hartpury college to take in Murrel’s End. It was then the ‘Leadons’, Up and High. Incident free, we passed Pauntley Court, birth place of Dick Whittington, and tackled an interesting climb at another Murrel’s End (limited tarmac remaining) to pop out at Redmarley – quite superb views of steep-sided valleys here. Onwards on the dusty road to Bromsberrow Heath, and crossing the River Leadon for the final time, on to Ludstock and a delightful lane of indifferent surface quality into Ledbury. Spot on 11am, 24 miles. Coffee #1 proved a success.

Five riders continued to lunch on a route made up ‘in the saddle’. The sun was showing, so we took in Donnington (it should be twinned with its famous beer-brewing namesake in the Cotswolds), a half mile repeat of the morning route (minus point for the leader!) and then to Dymock. Twists and turns took us to Stonehouse Farm (bad odour from the substantial chicken sheds), Kempley, Gorsley and a new road for all the riders. A remarkable little lane, enhanced by a house with possibly thousands of pallets stacked along the roadside and into the woods. If you are short of a pallet or two, call by here! The back lanes of Gorsley are designed to confuse, but we held our nerve and took a good right turn to climb up to Linton Ridge – likely a steeper climb than the Sports ride had taken (see picture). The Penny Farthing looked too popular, so onwards and downwards to The Kilcot Inn where a warm welcome was received and good beer exchanged for a tap of the plastic.

Our route home was relatively simple, taking in the Newent west bypass, then Taynton, Tibberton, dog lane (no dog today) and home. A most pleasant 57 miles all told.