Our first ride of February 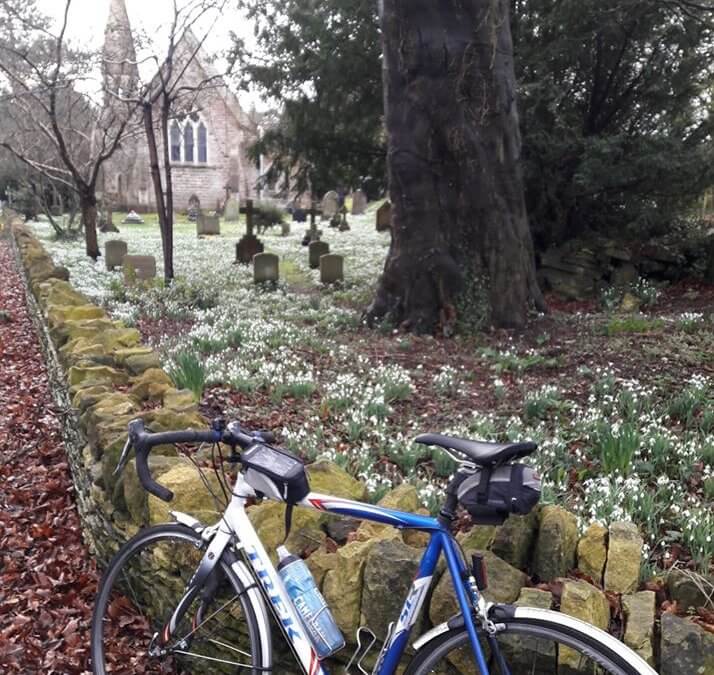 When you are going well on the bike, hills are a real pleasure. Effortlessly gaining altitude, and sometimes being able to give a cheeky look over your shoulder at your suffering mates, in the style of “he who
shall not be named” looking at Jan Ulrich. When you are still carrying a few extra pounds from Christmas, when breathing becomes laboured, and when your legs are rebelling, then they can be the work of the devil.  Sadly, this was my state going into today’s hilly ride.  In addition to the hills, a strong head-wind along the tops made any thoughts of rest dilusional. A stop to repair a puncture at the most exposed point, near Kingscote, made us all rather cold for the descent into Wooton where at Gordon’s suggestion we stopped for coffee and cake.

A flatter route was chosen by the Captain for his planned ride to Eastwood Garden Centre, one of our more distant Sunday ride destinations. The ride started badly when Ken punctured before Southagte became Bristol Road, then the fierce headwind took its toll on our speed. The death knell to our plans for coffee at eleven came with Ken’s second puncture. The only person happy about it was Mark, who could see that his previously dominant lead in the competition for Bruce’s Bonus was being rapidly eroded. After we crossed the canal below Blunder Lock Paul made the mistake of asking the Captain where the side road, Millend Lane, led. This encouragement was all that was needed to divert the route over Cress Green on a surfaced but rather narrow path – too narrow for a bike to pass a  baby buggy, as we discovered.

At Coaley all hope of reaching Falfield was abandoned and the group sundered, all aiming to join the A ride at Berkeley but none wanting to wait too long for their elevenses! Afterwards a tail wind up the vale seemed well earned, as was a refreshing pint at the Ship Inn in Upper Framilode.

Thanks to Paul Scott for the photo of the snopdrops.