Fancy dress ride? Only if you count wet weather gear! 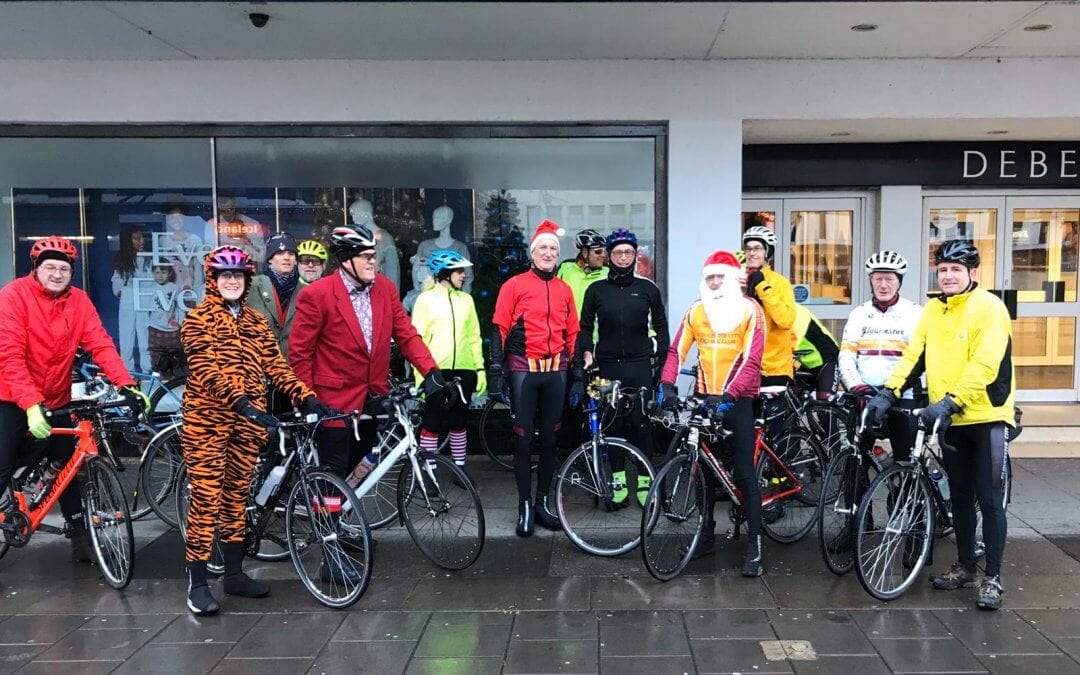 The ‘Fancy Dress’ ride saw a reasonable turnout in some level of seasonal attire, and some in smart dress code, and some in proper Fancy Dress – well done to all that made the effort. It turned into a cold wet morning ride, with gradually improving conditions. Natalie won the fancy dress prize, in a onesy tiger costume. She must have had Frosties for breakfast because the bulky outfit proved no encumbrance to her as the tail wind blew everyone up the Severn Vale. Having been passed by four tractors on Over Causeway we thought there must be something on and sure enough at Colways Farm we saw them congregating. Before we’d reached Tirley we saw a further thirteen and a half tractors heading for the meet, some sounding their horns in greeting.

At Forthampton the hitherto light rain, which had already seen many riders cape up, turned the volume up to eleven. Our ride leader (bravely risking a mutiny) turned north, away from the cafe, leaving four mutineers to take a shorter route via Corse Lawn. Of these, the President soon decided that enough was enough and headed home, sacrificing his Dancey Trophy point. His decision proved to be a hasty one as the rain passed to be replaced with bright sunshine, enough to get most clothing dry by coffee time. Alas, once the water has run into waterproof boots it has nowhere to run, and the feet within have nowhere to hide. Or dry out. At least Pete wasn’t troubled by hot feet, though he did say he’d arrived at Trioscape after a proper soaking – hail, wind, rain, and more.

Meanwhile, the AA ride took it easy up Woolridge Hill, then down to Ashleworth where we were greeted by two appreciative horseriders. A hop over to the A417 for a short stretch, with views to the west looking wet and coming our way.  A timely deflation for Abi P on her retro Peugeot allowed the group to don waterproofs as Mr P immersed the faulty tube in a particularly muddy puddle. Nothing located in the tyre, a new tube was inserted and after much huffing we set of into the strengthening rain. Turning to the west we had the full benefit of cold rain needles, really quite painful. Oh, the joys of winter cycling! Still, the group pressed on to cross the fast flowing river Leadon and along to Hooks Lane. Here the Pearces’ fled, sensibly, directly to the appointed coffee stop at Trioscope, whilst the remaining three took in a loop to make the most of the conditions. Fortunately the coffee stop was warm and accommodating. It was a while before the ‘B’ riders joined us, having encountered more rain and hail than the AA group.

The weather took a turn for the better, so a group made the most of this opportunity to cover a return leg to Gloucester via Staunton, Ashleworth and Hartpury. Sunday lunch was very much enjoyed at the Dick Whittington in the city.