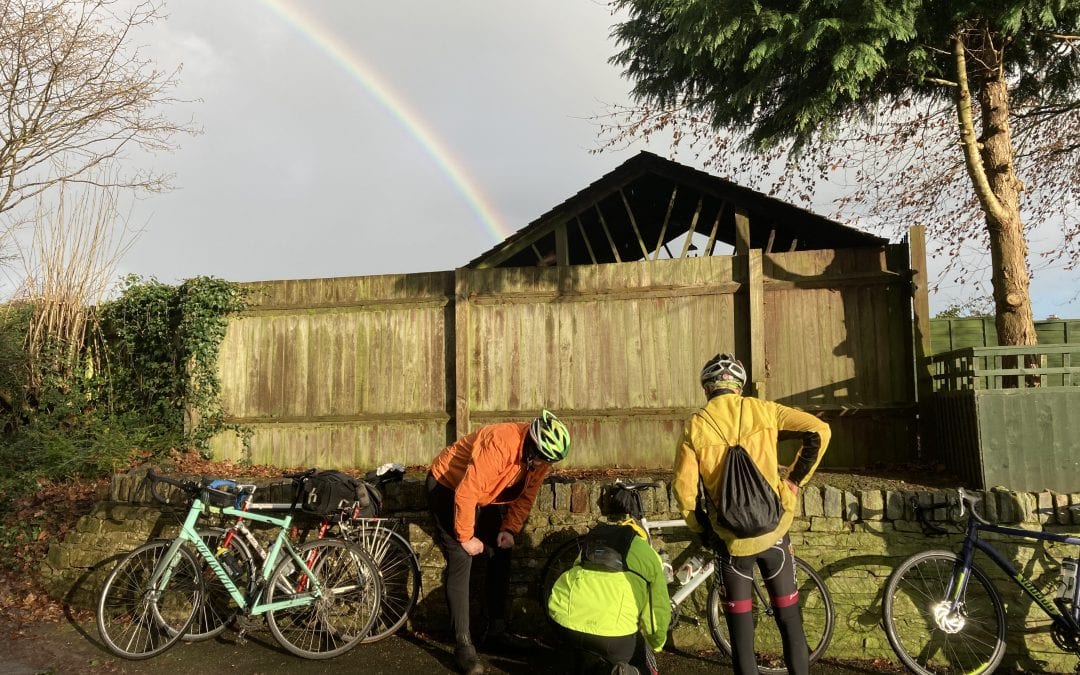 For the last Sunday ride before Christmas the sun came out, highlighting a full rainbow against dark clouds to the north. A good turnout of riders meant two B rides as well as an A ride and the sports ride left the meet at Kings Square.

In the A ride, five set off in darkening conditions. To bypass the rain they headed to Highnam and Tibberton, where a well-formed rainbow greeted them on the road to Huntley. Light rain descended, then heavier so the last rider caped-up (the leader). Road conditions were consistent – very wet.

The wind-assisted section to Newent was in sunshine, mainly, and a series of turnings saw Newent arboretum attained. Here they encountered the first mechanical issue: a snapped rear derailleur hanger bolt. John W was the unfortunate victim. A rapid conversion to single speed was affected in the sunshine with the help of Colin’s equipment and experience. Bravo.

Time and rain were pressing so a much-curtailed route to Roses was agreed, via Oxenhall. The descent past the church was poor and rock-strewn, causing a pinch puncture and instant deflation for the Captain. Another rapid fix saw us back on the road, such as it was, and the coffee stop was gained at 11am. Roses cafe did us proud, meeting the regulations currently in place. Two from the second B ride arrived for refreshments.

By common agreement the route home was direct: Upleadon / Highleadon, the River Leadon impressively breaching its banks onto the flood plain: house builders be aware! Around Hartpury for our third mechanical issue: a dodgy back wheel / brake and gear combo for Steven saw a slight delay and at least two riders enjoyed another good rainbow. A swift run in to town avoided any further rain for refreshments and cake at the Gala club.

The President took his fixed wheel bike out with the faster B group, where the Vice-captain took advantage of his newly repaired derailleur gears to set a cracking pace downwind to Norton and the Haw. El Presidente had brought a knife to a gun fight!

Wainlodes lane was just above the surrounding flood-water, and riders enjoyed a stunning view of the Malvern Hills then, strangely, as soon as the group turned west, over the river (and not coincidentally out of the wind) the pacemakers dropped to the back of the foursome. The fixie stayed on the front for a charge past Pitch Farm and up Tirley Knowle but took its rider so far into the red that he was expecting a call from his bank manager.

More fast work on the northbound stretch to Eldersfield kept the heart rate up but not enough to keep warm, intermittent showers having penetrated the traditional Christmas jersey. The pitch up to the Pendock Road was a final straw and the President turned home, after donning a rain jacket and a second (dry) pair of gloved for a steady ride back. The weather deteriorated further and the remainder of the group caped up in Bromsberrow. More than damp, they too opted to return to Gloucester without stopping at the Cafe. After a hot shower, and in dry clothes, it seemed an enjoyable morning out.