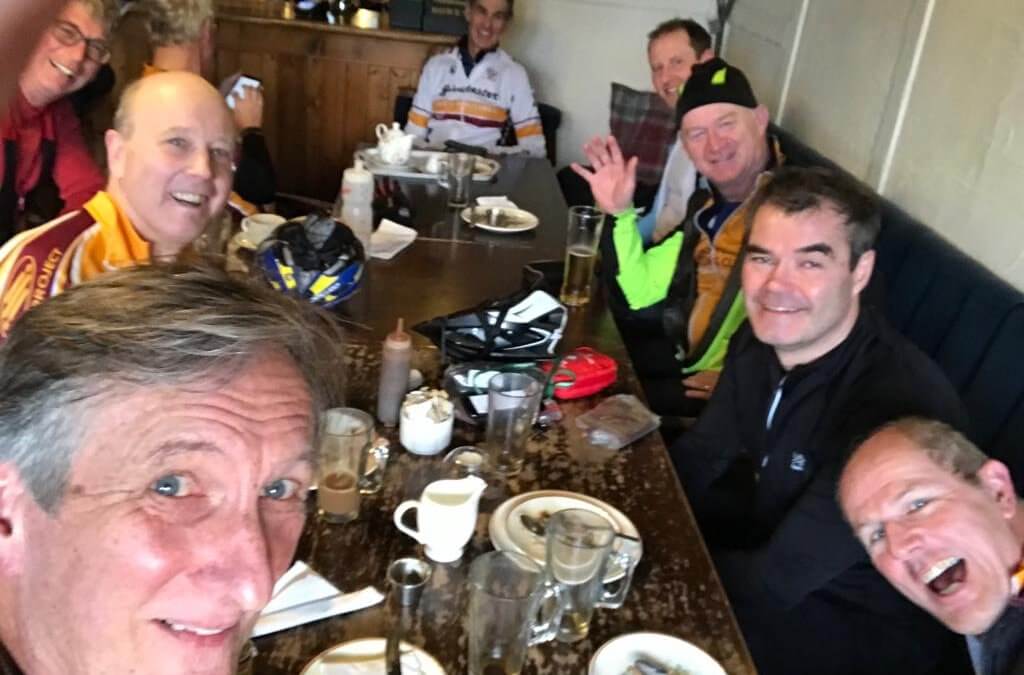 Very noisy tree work in King’s Square made for a slightly confusing start, but eventually the rides sorted themselves out, and eight of us set off on the “faster B” ride to Cinderford. It was a well-matched group and stayed together well. Muddy and sometimes flooded lanes proved to be the main feature of the ride, and there were many complaints that mudguards were not long enough, especially the rear ones.Although advertised as “a mostly a flat route” a 20% gradient sign was observed in Dymock Wood and the President’s Garmin displayed 14% on one ascent. He was grateful not to have brought his fixed wheel bike out today.

A demonstration as to the benefits of publishing the route in advance occurred in Oxenhall, where the ride leader set off to the ford North of Gorsley, which is tricky at the best of times, and would not have been wise in these conditions. However, the other riders corrected him, and we continued on the advertised route.

After Lea we noted that the mannequins at Victoria Cottage were still wearing their Santa hats. “What about twelfth night?”, we wondered.

A large flood was encountered at Sandford Bridge, and one brave volunteer was sent in to determine the depth. Seeing that it was below bottom bracket, we all followed, and climbed up to the very welcoming Woodlands cafe in Cinderford. At the cafe, we sat in the bar, which proved too tempting to one rider, whose “no solid food” diet apparently allowed a pint of beer.

On leaving the cafe, we followed our local guide, as most of us find the Forest a very confusing place. However, even the local guide was confused by the depths of Cinderford, and we ended up descending a very steep foot-path to escape from a dead-end road. A very pleasant ride back through Soudley and Flaxley ended with the predictable sprint on the A40.