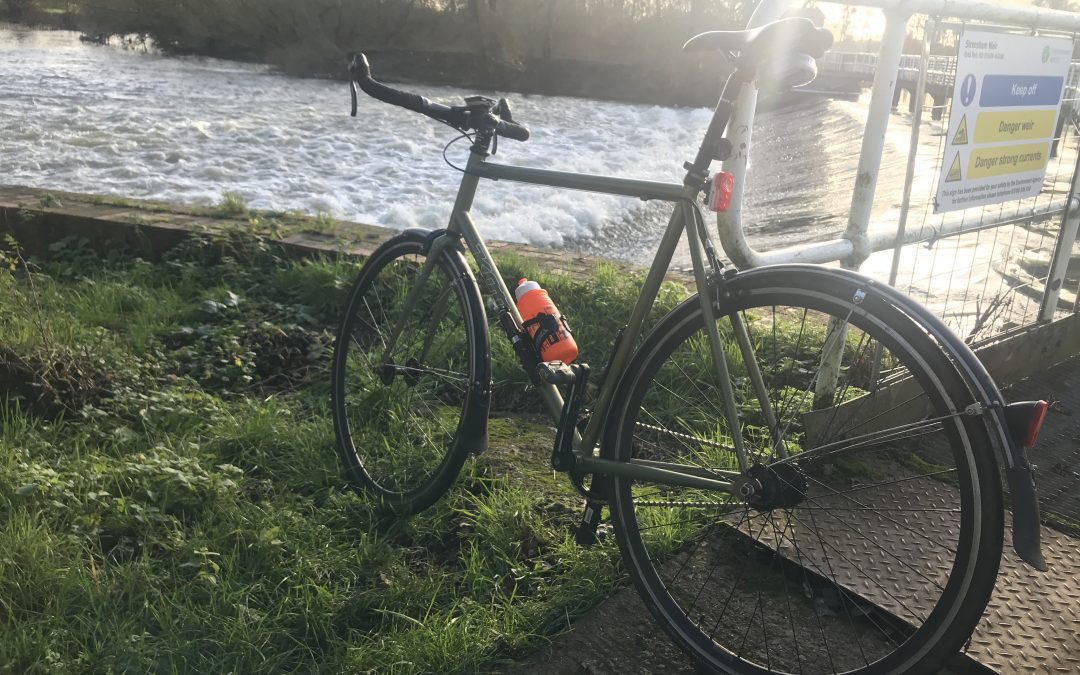 The expectation in January is either rain or ice, so it was a real bonus to have neither this morning. Eleven riders set off from King’s Square for the National Trust’s Croome Park in a well matched group and enjoyed a flat sociably paced ride in the sunshine, where all riders stayed together. The only tension in the group was in the queue for coffee, where we could all count the number of slices of fruit cake left and realised that it was going to run out at some point (the ride leader was the one to lose out). The cause was high demand, with the car park full and vehicles queuing along the road awaiting a vacant spot. With no events scheduled it can only have been the sunshine that drew the crowds. While it was great to have an uneventful ride, it does make for a brief report.

The President decided to make it more eventful by trying out a smaller sprocket on his fixie. Apparently, it went well, as the rest of the group was happy to sit behind him from Staverton to Piffs Elm. Leaving them at Tredington to explore the Avon crossing at Strensham, he re-joined them at the cafe to find a huge, slow-moving, queue and that they had left him no cake. A U turn was made. Noting that NCN 45 was marked at Baughton as impassable except in dry conditions (not quite true, but wise counsel nonetheless) he avoided the muddy section and stopped for coffee and a flapjack at Twyning. It is said that a fixed wheel helps to get tired legs home, but the unaccustomed higher gear and a nagging headwind certainly demonstrated that it helps to get legs tired!

The ‘A’ ride morphed into more of a ‘B’, but no complaints from the seven attendees. Early stress relating to the potential for black ice fortunately proved unnecessary, although you must be careful this time of year. With three fallers on a Friday ride, the two out today were understandably super-cautious. Although the destination was Clive’s Fruit Farm at Upton, the route was a devious affair: Woolridge Hill, Hartpury college, Upleadon and then at last north in the general direction of Upton. Further twists and turns kept the pack guessing, including at one junction our esteemed leader! A short distance in the wrong direction was quickly corrected and it was along the B4208 to Welland with a friendly tail wind that saw us make rapid progress to the destination. We were joined by one rider, fresh from his solo ride to Croome Park. The return took in Longdon, Piper’s End, Guller’s End and the Rampings. Very few motor vehicles encountered, many cyclists – how good is that! Then the usual lanes back into Gloucestershire at Forthampton, onwards to Tirley and Ashleworth. Three stopped off at The Royal Exchange and luck being on their side secured an indoor table.
Share on Facebook Share
Share on TwitterTweet
Share on Pinterest Share